Zach has only one goal in life:
To make the man, who had taken his mother from him, pay for everything he’d done.
Now, the only thing standing between him and the revenge he so desperately craves is a marriage to a woman he despises.
But from the moment they say ‘I do’, he learns that his bride is not what he thought she’d be, and walls that he’d built around his heart start to crumble.
What happens when he realizes the woman he is living with, is also the woman he can’t live without.
And how will he handle it when he finds out that he isn’t the only one with an agenda?

Natalie has only one goal in life:
To get as far away from her current situation as possible.
The out she so desperately seeks comes in the form of an arranged marriage to a man who makes no secret of the fact that he dislikes her.
Natalie soon realizes that Zach will not be her knight in shining armor, but that doesn’t stop her from hoping that he would see past the rumors and lies to notice the woman she keeps hidden from the world. 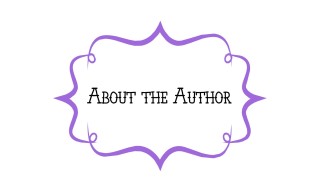 Even as a young child I would conjure up stories with my imagination, sharing them with anyone who was around to listen. But my love affair with writing truly took flight when I discovered that I wanted to be the one who created the worlds avid readers – such as myself – like to get lost in. And so A.K MacBride, the author, was born.

I would describe my books as sweet and sensual and filled with enough romance to make you swoon. The real word is boring enough, therefore I want my books to be an escape. I love creating characters that are real and flawed. Stubborn males and defiant females to tame them. A HEA is a must.

I live in beautiful South Africa with my husband and daughter. We happily share our small-town home with a cat – who thinks he’s the boss – and two dogs. There is never a dull moment in the madhouse we call home. But, hey, I wouldn’t want it any other way.

This was my first A.K. MacBride book, but man what a way to start! This was an enemies to lovers story, but Natalie and Zach didn’t actually hate each other. Zach hated the idea of Natalie, and the rumors that were spreading about her, and Natalie at first was hopeful about the marriage, but quickly realized Zach was kind of a jerk. I’ve been reading a lot of the “instant connection” books recently, which I love and adore, so I almost forgot what it was like to read about two people over coming a heck of a lot of back story to fall in love with each other.

Zach is on a one-man express towards revenge-town on the man that caused his mother to commit suicide. This has been sole reason for being successful for years. One of the consequences means dealing with the man that caused all his problems…. and marrying the man’s daughter. He wasn’t expecting Natalie though. Natalie that has rumors spread about her in the gossip rags; Natalie that is praying for her new husband to see through the facade she shows to the world; Natalie that prays for help.

When reading this book, you learn so much about both Natalie and Zach. The flow of this book is so natural, you end up flipping pages with out realizing it’s over. In fact, I was kind of mad when this was over. I mean HELLO, I obviously need more to this story, thank you very much. Natalie and Zach both develop as people, and watching/reading their story unfold was really amazing. I cannot WAIT to read more of A.K. MacBride! 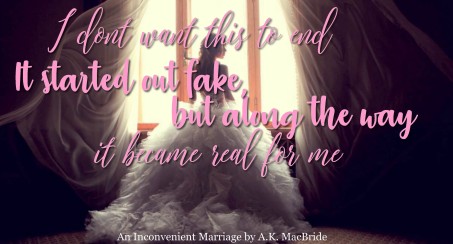