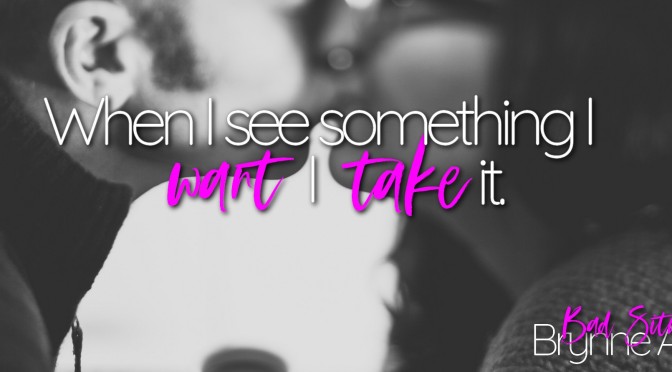 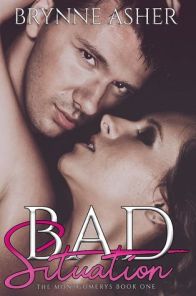 A group of women walk into a bar…

Sounds like the start of a crude joke, right? Yeah, well, the joke’s on me because I’m investigating the gorgeous one in the heels with the great ass. Jensen Montgomery.

Now I’m treading that area between right and wrong, good and bad, where sin and honor meld to become gray. Not that I haven’t been here before. Hell, I’ve made my career in the gray. I never hesitate going to battle when my gut tells me I’m right. And right now, my gut—among other things—is speaking loud and clear about Jen Montgomery.

She’s in a bad situation. Not just bad—deep and black and ugly.

And I’m about to make it worse. She just doesn’t know it yet.

Warning: This author is also a mom who runs a PG-13 home. This book is not PG-13. If you are under the age of 18, do NOT pick up this book. This author doesn’t enjoy mama-drama of any sorts. Do her a favor and walk away.

Brynne Asher lives in the Midwest with her husband, three children, and her perfect dog. When she isn’t creating pretend people and relationships in her head, she is running her kids around and doing laundry. She enjoys cooking, decorating, shopping at outlet malls as well as online and is always seeking the best deal. A perfect day in “Brynne World” ends in front of an outdoor fire with family, friends, s’mores, and a delicious cocktail.

YAS GURL WHAT. ALL THE FINGER SNAPS. ALL. OF. THEM.

Bad Situation was AH-MAZING. 100 PERCENT. Eli Petit, the half alpha-ahole obsessed with Jensen Montgomery’s butt, was the perfect mix between over protective and workaholic that blended seamlessly with Jen’s workaholic life. He didn’t know he needed a fiesty CFO in his life until a dance that shouldn’t have happened and an arrest that should have been laughed at.

As for Jen, she definitely didn’t think she needed a booty obsessed FBI agent that toes the line, just barely, in her life. Between mergers and acquisitions, philanthropy work, running a company, keeping her crazy family in line, and dealing with an a-hole brother-in-law, she is way too busy. She definitely doesn’t need to add a certain FBI agent, that she shouldn’t be involved with since she’s under investigation, onto her to-do list.

Too bad Eli doesn’t care about rules. He bull dozes his way into Jen’s life and into her heart, and dragged me right along with them. Jen doesn’t lie down and take it though (even though I SO would have okkkkkkk), she’s too smart for that. Though her instincts tell her to give in and call him, her head wins out.

Eli doesn’t listen to what his supervisors say, or what Jen says. He helps her despite the fact he shouldn’t. He falls in love with her even though they shouldn’t have even gotten involved with each other. He doesn’t mind being her dirty secret since it means he can touch her butt (he really is an ass man).

One of the reasons he and Jen work so well together is because they both realize how important their work is. Eli is secure enough that he doesn’t care how much money Jen has, and Jen doesn’t care that Eli is an FBI agent. Their work means they spend a lot of time in the office, but it doesn’t affect their relationship.

Which is all the amazingness.

Before I gush all over myself and just give away the plot, I’m gonna stop myself.

I know this was a crossover-ish book between Paths and Athica Lane, but I honestly didnt’ remember Eli from Paths. Everyone remembers the Montgomerys (cause they’re hella awesome) but I didn’t have time to re-read Paths before Bad Situation.

If you’re waiting for it to be announced, you’ll have to wait until they end of the book. However, if you’re like me, you’ll go OH I REMEMBER NOW when it’s too danged late. If you haven’t read either of those books (SHAME) you won’t have to in order to read Situation (THOUGH YOU SHOULD).

So here I am, reading along like a good little ARC reader, trying to figure out what’s going on when Brynne SHOCKS THE BEJESUS OUT OF ME and then goes and ENDS THE FREAKING BOOK while I’m here shaking like a crack addict going through withdrawl waiting for the next book…

Think Eli will arrest me 😉

ANYWAYS. I’m going to go cry a little bit while I wait for Brynne to feed my totally (un)healthy addiction.