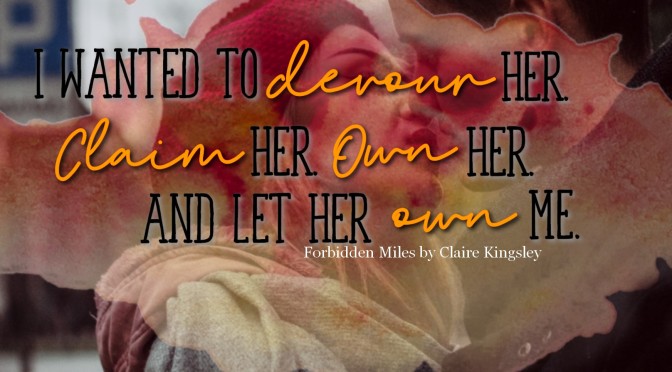 “Either I was seeing things, or Cooper was stalking down the aisle toward us. In his underwear. Nope, I wasn’t seeing things. It was my nightmare come true.”

Moving back to my family’s winery seemed like a good idea. I can save money, be closer to my family… But I forgot that when you’re the baby of the family—and your three older brothers are basically insane—life can get complicated.

Dating? Forget about it. I’m the forbidden one. There isn’t a bad boy in this town who’s bad enough to go after Brynn Miles. Not with my brothers acting like human chastity belts.

Finding love isn’t my focus anyway. Except… there’s this guy. And he’s kind of amazing. I didn’t see him coming, and it figures I’d fall for the one guy in the world I shouldn’t. He’s T-R-O-U-B-L-E. Untouchable. And just as forbidden as I am.

Am I ready to put my whole family on the line for a fiery case of lust? But what if it isn’t? What if it’s love?

**Each book in the Miles Family series ends with a romantic HEA, but there is an ongoing subplot that spans the entire series. Contains explicit language and content.**

She can’t imagine life without coffee, her Kindle, and the sexy heroes who inhabit her imagination. She’s living out her own happily ever after in the Pacific Northwest with her husband and three kids.

I’ve read one of Claire’s books before, and it made me want to devour every one she’s ever written. Her writing style is amazing. The flow is amazing. She blew me away with Book Boyfriend, but she absolutely AMAZED me with Forbidden Miles.

Brynn is the baby of the Miles family. She’s back home after living at college for the last few years. She’s happy to be back, happy to be near her family again, even if they drive her nuts. She’s funny, mature, and smart enough to have given up her long time crush on her older brother’s best friend.

Well… until Chase sees Brynn for the first time. And not as the forbidden Miles he’s helped the brothers protect and defend. Not as his best friend’s little sister. No, as a woman. And at first he’s all “HELL no I can’t go there” but when he decides she’s worth it? That he needs her in his life? PFFFFT she never stood a chance. Hell, I didn’t stand a chance.

When I say this book had it all, I mean had it all. Chase is a sweet heart, looking for the family he never had. He listens to Brynn and talks to her. He doesn’t treat her like a little kid, he doesn’t ignore her wants and dreams just because of her age. He takes her education as seriously as she does, and he risks his bromance with his best friend to get what he’s always wanted: love.

Brynn is so strong, willing to give up what could be the best thing that’s ever happened to her so Chase doesn’t lose Cooper. Her family is the greatest, but it comes with it’s own issues. But Chase doesn’t downplay her problems because her family is amazing. Each and every interaction they have with each other makes their love grow until nothing could ever get in between them.

Chase and Claire have a bond that couldn’t be destroyed, despite the outside influences that tried to rip them apart. Claire Kingsley brings you a love so sweet, so powerful you want to re read the story over and over again, infusing it with humor and an edge of mystery. Trust me when I say you’re going to want Chase and Brynn in your life. And if you don’t believe me, you’re going to want to read it just to read the epic Chase and Cooper bromance.