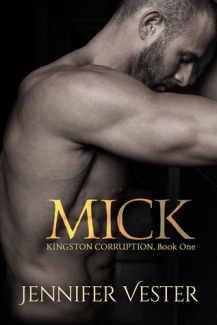 In a city without justice, sometimes doing the wrong thing may be the right thing to do. Welcome to Kingston, a city of corruption, crime and greed.

Mick, now a fallen man, returns home after a tragic incident that haunts him. With the events of his past plaguing him he’s a broken man. Troubled by his memories, he knows that life will never be the same.

Alisa had her own agonizing journey in life. Her family rules the city through any means. When she moves home, her future seems decided, but she’s always known what it meant to be a King.

He’s a lonely haunted man. She’s the light to his darkness. A chance meeting and it all begins…

In this suspenseful, passionate story, two people will have to fight for their future, in a city that will test the truth of their convictions. Love has a cost, and only sacrifice will show the way.

Jennifer Vester is a romance author whose ambition is to entertain readers with off-beat female characters and theover-the-top alpha men that love them.

Every time I read one of Jennifer’s books, I’m blown away. Truly. Reading the Lakefield series in succession, I saw Jennifer’s way with words go from great to amazing. In Mick I was left broken, with my pieces stitched back together, left hanging by a thread. I connected with Mick on a level I hadn’t with anyone in her other books. Although Brock will always be mine (hah S Van Horne had to give up her boys so I’m claiming him), Mick broke my heart.

We all got snippets of Mick in the last of the Lakefield series, though you don’t have to read those books before this one I HIGHLY SUGGEST IT, but that was before he was broken. We got little bits of the cold man, but that was before his soul was left withered and dried up. There was nothing he could do, nothing anyone could do, to breathe life into his life. There was no light to his darkness, no saint to his sinner.

…Until Alisa stumbles into his lap. From the first, they have a pull towards each other. As much as Mick wants to stay away, he can’t. And he doesn’t want to. Besides the fact, Alisa wouldn’t let him. She may have been sweet, choosing to see the good in everyone, but she got what she wanted too. And what she wanted was Mick.

This was darker, grittier, bloodier than I had been expecting (I’m lying, I totally stalk Jennifer’s updates so I was expecting the darkness), but it was so amazingly well written, you end up rooting for the bad guys. Because this isn’t like Lakefield, where the guys toe the line and sometimes blur it to their advantage. Mick is a bad guy. Alisa sees it, accepts it, loves him despite the demons that hold him back.

Everything about this book felt natural. The progression, the emotion, the bonds that were created. It was the definition of “page-turner”. If you’ve read my other reviews of Jennifer’s books, you know I dubbed her the Queen of Plot Twists… she doesn’t disappoint here either. Every time you think you’ve got something figured out, she twists it up on you, leaving you like one of Pavlov’s dogs, drooling at the sight of a new release.

And if you’re looking for a dark book that can make your glasses fog… look no further. Alisa and Mick burn the sheets in ways that had me reaching for a little paper fan in the middle of the night.

This book has it ALL.