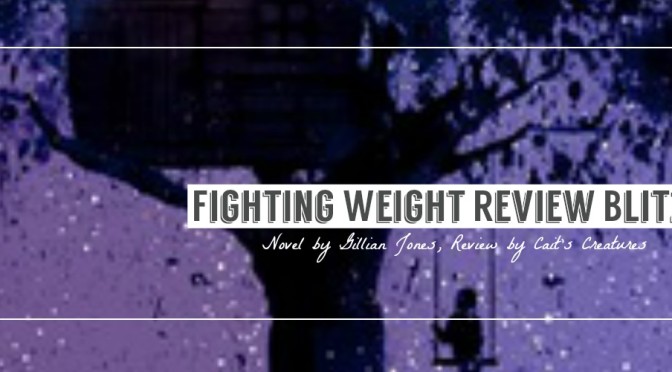 We all have that voice inside our heads.

The one that speaks to us incessantly. That voice we trust to make the right decisions, to keep us on a positive path, even when others try to bring us down.

But what happens when that voice changes?
When it’s no longer a voice of reason, a voice of comfort giving us a pep talk when we need one?

What happens when that inner voice turns into a bully?

What happens when that inner voice makes your body take its side?
Binge.
Purge.
Binge
Purge.

And what happens when the bully starts to win?

If your name is Alina Cassidy, then you fight like hell.

Wife, mother, proud Canadian. Shoe addict, red wine connoisseur, lover of laughter and the friendships that cause it. I’m a sucker for those epic romances that steal my breath and leave me always wanting more. Gillian’s Website. Gillian’s Facebook

“My bully and I were first introduced in October. I had just turned thirteen the week before.”

I’m not sure I have the right words for this novel. It was intense, romantic, supportive, and so accurately depicted the struggles of living with an internal bully. From the very first line I was captivated and drawn in.

I’m sitting here struggling to write this review because this is a book that you have to read for yourself. I can’t explain the emotions I had reading this, I can’t tell you how elegantly and accurately Gillian Jones depicts living with an eating disorder and body dysmorphia. I cannot explain to you how wonderful this novel is.

The writing in this novel was so amazing, I almost feel bad for the editor to have to have read this and gone through the emotional roller coaster this novel is more than once. The flow of the novel is perfect. And the dual POV to show how Alina thinks as well as how Slater thinks is captivating.

Gillian beautifully explains the use of therapy, both group and individual, as well as having amazing support systems at home and in life. She is able to show the change in attitudes towards therapy without writing a novel that is thousands of pages long.

It took me a long time to be able to write this review, and honestly I’m still struggling with it. It left me in a book hangover, and had my emotions all over the place. Gillian describes the ugliness of eating disorders as well as the way life is while dealing with one for the rest of your life. The juxtaposition between Alina’s before and after are so clear it really helps to take the novel just one more step. In truth the only way to describe Fighting Weight was inspirational. Since I’ve read this novel, I’ve been searching for what to read next. After reading such a dynamic book, I’m not sure anything can come close to this.

This was my first Gillian Jones book and I cannot wait to find more. If I could give this more than 5 stars, I 100% would. How do you give a novel only 5 stars when an author makes you cry both for the characters in the novel, but also yourself? I’ve never had an eating disorder, but I have my own voice in my head, my own bully, telling me what I can and cannot do or accomplish, telling me how I look, belittling and demeaning everything I do. I never struggled with the binge and purge cycle but the way Gillian weaves the story, by the end, I felt like I had gone through Alina’s journey with her. It was magical.

Maria laid on the floor doing her nightly workout.

It was rough but she was dedicated. She had already lost fifteen pounds, she just had to lose thirty more and she would reach her weight goal. She was being very careful, making sure to only drink water in the morning, and only eat celery in for dinner. She told people she was on a cleanse. Most people said she didn’t need to lose the weight, that she was fine.

But she wasn’t. Nowhere close to it.

She didn’t want to be fat anymore, she hated the way she looked. She hated her muffin top, the way her stomach fell over her jeans like she was pregnant, how her chest was sagging, how her arms flapped when she moved them, how her legs jiggled when she walked. She hated everything about herself, but soon she would love herself. Soon.

Once she was done, and drenched in sweat, she looked at herself in the full length mirror in her room. She thought she could already see a difference, but she knew she had to keep going. She was already getting compliments on her weight loss. People were telling her that she was glowing, that she looked better than ever, and Maria was very happy about that.

She couldn’t wait until her stomach was concave, her arms were muscular, without being to much like a body builder, until her hip bones jutted out just a little, until her thighs had space in between them. There were many things she was looking forward to, but mostly she was just looking forward to being skinny.

Just another forty pounds to go.

Maria went to the bathroom to take a shower, but first she had to weigh her self to make sure she did not gain weight that day. The scale weighed her at 101 pounds yesterday, and today she was 101. Although she was disappointed she hadn’t lost anything, she was also glad she hadn’t gained any weight either. Her cleanse must be working the way it should.

Before Maria started her rigorous workout and strict “cleanse” she was around a healthy 120 pounds for a young woman somewhere between 5’3 and 5’5. No one could pinpoint her height since she seemed to grow and shrink on a day to day basis. But she was never satisfied with herself. She was always looking at the models in magazines, at the way her stomach looked like she had a beer gut. People always hit her thighs, joking around about the way they would jiggle. Her family would tease her about the way her arms would flap whenever she moved them. “Chicken Wings” they called them. She hated her chicken wings. Everyone asked her to workout with them, and she knew it was because she was fat. Obese. Giant.

As Maria laid in the tub, letting the hot water spray over her, she imagined her life as skinny. Men would say hi to her, maybe even flirt with her. Maybe she’d go get a boob job so she could be skinny and have big, perky boobs. Women would be jealous of her body, of the way she looked. Maybe she would try being a model. Sure she was short, but she could wear high heels and look tall. Of course, she would have to get a face lift to get rid of the wrinkles around her eyes. But hey, plastic surgery could fix the other stuff. For now she just had to lose the weight.

Maria left the tub and went into her room. She could smell the Chinese food her roommate ordered, tempting her, calling out to her, to eat it. No! she told herself sternly. Do you want to be fat again? She shook her head gently, scolding herself. No, she would never be fat again.

She stood in front of her mirror, naked, pulling at the loose skin, at the fat still left on her body.

Fifty pounds to go and she would be happy.